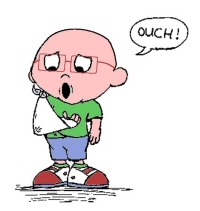 When visiting our Training Centre in Manchester, England on Friday, 18 February 2005, I was moving some of my training equipment to pack into my car in order to drive across to Ireland to run some courses at GlaxoSmithKline, Cork.

The equipment was in boxes weighing about 22 kg (48 lbs) each. Due to faulty equipment, one fell off the trolley and I tried to catch it! I tore my bicep away from my right forearm where arrowed (I am right-handed). I was taken to Trafford General Hospital in Manchester, and had a four-hour operation. I was discharged from the hospital on Thursday, 24 February 2005.

My arm was in plaster. The plaster was removed at Wishaw General Hospital, here in Scotland, on Wednesday 2 March 2005, to remove the stitches. My arm and wrist were very painful. The operation wound is 100 mm (over 4 inches) long. The plaster was then replaced.

The consultant believes that it will be many weeks before all is ok, and advised that I would never recover full use of my right arm as they had to shorten the muscle to affect the repair.

Hospital visit 16 March 2005. The plaster was removed, and my wrist became very painful again. I had an X-Ray and the hospital discovered that I also had a broken wrist (scaphoid) which had not been previously noticed by either hospital. I am now back in plaster again! I have been advised that my wrist could take between 6 weeks and 6 months to heal, with possibly more surgery, due to the delay in treatment.

Hospital visit 23 March 2005. Right hand badly swollen. They removed plaster cast and took four more X-Rays. Swelling thought to be caused by tight and long cast preventing any exercise of the arm. Now fitted with a lightweight, removable splint. New X-Rays showed that wrist was not broken, but cracked.

Hospital visit 4 May 2005. Slow progress. I now have about 90% angular elbow movement, but this will probably not improve. I have about 60% rotational movement which may improve over several months, but only to a maximum of 80% at best. Very restricted movement in wrist and fingers, which will hopefully improve with the physiotherapy. I have no muscular strength in the elbow, wrist or fingers. They did a grip strength test. My left hand registered 110, whereas my right hand registered 9. Consultant has recommended at least another 2 months off work! This is a problem, because I retire from work at the end of July 2005, so I will try to get back to work in June.

Physiotherapy 20 May 2005 - now also on course of acupuncture for pain in the arm.

Hospital visit 25 May 2005 - doctors confirmed that I must be off work until next visit to the consultant surgeon.

6th July 2005 - visit to Consultant. At last, I am to return to work next Monday (hooray!), but only "light duties". Strength test on right hand now registering 30% compared to left hand, rotational movement up to about 70%. Consultant believes it will not improve much more than that. I still have to continue with the Physiotherapy for the foreseeable future.

More updates as milestones are achieved, for anyone interested.

16th October 2005. Today I played for my first church service since the accident (at Christ Church, Lanark - details on the "Scotland" page). Hand and fingers were very sore afterwards, but I believe all went well, and I had some excellent feedback from the congregation afterwards, so no one noticed the mistakes!!!

30th December 2005. This will be the last entry on this page. Arm much improved, although fingers still stiff, which means no very fast pieces can be played (Widor's Toccata etc!!!). Played for Christmas Service at Christ Church, Lanark, 2005, and all went well. I hope to start playing for services more often from now on.