It was initially thought that the origin of the surname Blaber was English, possibly of nickname origin, referring to a personal characteristic of the initial bearer, thus affording him a suitable means of identity in his local community. In this instance, it is possibly a variant form of the word Blabber, meaning "a revealer of secrets, or a tell-tale". Also possible is that it is a variant of the Middle English word "blaberen" (13th-14th Century), which means "to talk foolishly or in an unguarded manner". The employment of the nickname in medieval England as a means of distinguishing reliably between two individuals who might otherwise have the same first name, was frequent, and did not necessarily convey a derogatory or hurtful connotation, but was rather an expression of affection and endearment, merely used for the purpose aforementioned. The fashion of adding surnames began in Britain in the thirteenth century when the population was expanding, becoming more complex, and there was a concerted movement from the countryside into the towns and villages.

Among the early written references to the name or a variant form, we read of one called William Blaber from the county of Norfolk in the year 1273, according to the Hundred Rolls of that time, and Johannes Blabour was mentioned in the Poll Tax Rolls for the county of Yorkshire in 1379

"Viking note: the most commonly occurring term for "blue" in period Norse is "blar" and means an almost black shade of blue. And there is a berry name "Blaber" in Old Norse, which Cleasby & Vigfusson translate as Vaccinium; and "a(th)alblaber" as Vaccinium myrtilllus (bilberry or whortleberry)

"Bláber, at least those that grow here in Iceland, are of a similar blue color as American blueberries (the botanical name is Vaccinium uliginosum). They are smaller but tastier than the American berries. A›albláber (bilberries, Vaccinium myrtillus) are dark blue, often almost black. They are not as common here and are considered even better, as signified by their name (a›al = main, which would mean "main blueberries". Bláber is of course the source for the alternate Scottish and Northern English name blaeberry.

John Peter Blaber (England) sent information on the Blaber/Blabir/Blabre/Blabyr/Blaeber name being mentioned in records in Scotland between 1408 and 1626, mainly in the Aberdeen area.

We now have copies of Marriage and Baptism records, 1616 - 1667 for a Blaber family residing in Kincardineshire, which was the next county south from Aberdeenshire, on the east coast of Scotland

The French Genealogy Society has been unable to trace the Blaber name, so a previous theory that we originated from the French Huguenots looks unlikely. We received a letter in January 1997 from Michael Gandy of The Huguenot Society of Great Britain and Ireland stating that they cannot trace any reference to the Blaber name (or variants) in their research files from 1680 to 1800. However, their records do not go back any further.

There is a cutlery company named "Lambert and Blaber". Have a look at your knives and forks to see if you have any of their cutlery. Click here to see their web site in the UK.

George Moore pointed us in the direction of the LDS Church FamilySearch site which lists many Blabers and one or two other spellings. One is from Mexico, christened 27th July 1871, and four are from Germany, dating from 1564 to 1730. This opens up yet another avenue of research. The LDS site is growing all the time, and is worth watching. Are there any Blaber family members out there who know of German (or Mexican) connections?

The Blaber River is a minor river in the Isle of Man. It rises on Beary Mountain and runs north by north west before joining the River Neb at the head of Glen Helen. 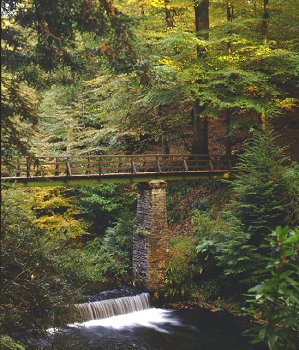 Bridge over the Blaber River, Isle of Man

Click here and here to see more photographs of the Blaber River.

Our thanks to all who helped so much throughout 2011 to increase our knowledge of the Blaber family world-wide. We look forward to the time when we may find the true origins of our family - who knows?? Keep that information flowing - it is very much appreciated.

Any comments, suggestions, recommendations or constructive criticism regarding this site would be very much appreciated also. Click here.

If you have even the smallest piece of information, please send it to us. It may be the one piece missing from the jigsaw that prevents us from completing the puzzle!

Photographs of past and present family members would also be more than welcome. These can be scanned and emailed to us, or send them to John's snail-mail address - we promise to return them as soon as possible. Please make initial contact via our Guest Book or Message Board.