This page is for publishing Blaber family news, and messages. Addresses and emails will not be included unless permission is received from the person involved.

Congratulations to Paul and Alison Stangeland on the birth of their son Ryan Michael Paul. Ryan was born on 2 July 2007 in  Canada. A grandson for Hugh and Trudy Ritchie.

Congratulations to Joseph Oliver and wife Carrie on the birth of their son Kyran Oliver. Kyran was born on 10 April 2006 in Moncton, New Brunswick, Canada. He is the first grandchild for Jon Victor Oliver, eldest son of the late Joseph and Irene (Puckett) Oliver.

Congratulations to Philip and Gabi Blaber on the birth of their daughter Laura Anne Bigelow Blaber. Laura was born on 3rd August 2005 in Hamburg, Germany, a sister for Patrick Hubert Bigelow Blaber.

Happy Birthday to all members of the Blaber family whose birthdays occur this month.

And especially to Olivia (Livvy) Blaber who's 11th Birthday is today - 25th February 2016!

Congratulations to all members of the Blaber family whose Wedding Anniversaries fall this month. 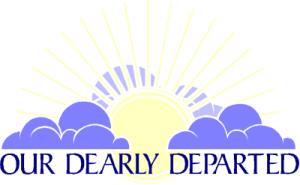 Our thoughts and condolences go out to the close families of those recently departed this life.

May died at the wonderful age of 100 yrs and 6 months. She was a kind and generous woman with a tenacious spirit. Beloved mother of Lynne Vickson.

Gordon passed away very unexpectedly on Friday 14th May 2010. He had not been ill, and the night before had been discussing their forthcoming holiday with his lovely wife, Barbara. He died peacefully in his sleep. He leaves behind two daughters, Sara and Carol, and grandson Charlie. Beloved brother of John A Blaber.

Rev. Kenneth Richard John BLABER passed away in Ladner, BC on October 21, 2008, at the age of 77 years.  Ken, one of eight children of Albert Edward BLABER and his wife Rosetta (nee STONEHAM), was born and raised in Eastbourne, East Sussex, England, where he first worked as a coal mine surveyor.  In 1956, he and his wife Joyce (nee LEE) also of Eastbourne, emigrated to Canada where Ken was initially employed as a mining engineer in northern Ontario.  In 1966, Ken was ordained by the Anglican Church and went on to serve as a parish priest and reserve chaplain in both Ontario and Quebec.  Following his retirement, he and Joyce spent a  number of years in the Kingston, Ontario area, prior to moving to Ladner, BC in 2005.  Ken is survived by his wife, Joyce, and children  Paul (Lisa Dixon) of Ottawa, Ontario, Andrew (Arlene) of Port Moodie. BC and Sharon (Grant) of Ladner, BC, 8 grandchildren and one brother, Stan (Doreen), of Westham, East Sussex.  Ken was very active in the church and volunteer community in Kingston and had a passion for travel, science and nature.  He will be greatly missed.

Mary lived for most of her later life in Eastbourne. She died just 12 days short of her 95th birthday. She leaves two sons, Trevor and Bryan.

On Thursday evening, 5th May 2005, Reginald J Blaber passed away. On Saturday, 30th April 2005, he slipped on a flight of stairs and suffered brain damage. On Thursday he was taken off life support and died hours later. He was a dedicated researcher into his branch of the Blaber family, and was instrumental in the formation of his family branch on this web site. "He was a great man and will be missed dearly" said his nephew, Jeremy Blaber, of Kingston, NY, USA.

OLIVER, Irene Eleanor - At the Herb Bassett Home, Prince Albert, on the 29th of March 2005, Irene 'Rene' Oliver (Puckett) passed away at the age of 95. Born in Prince Albert, she was the daughter of the late John and Bessie Puckett (Blaber). Rene lived a good and a full life, never far from her birthplace. She was a concerned teacher, a loving wife and mother, an indulgent grandmother, a voracious reader, an involved church goer, a successful gardener, a charming hostess, a crossword puzzle expert and her orange tarts were unequalled. She will be greatly missed but not forgotten. She leaves her daughter Megan of Whitehorse, Yukon, her son Hugh (Karen) of Edmonton, Alberta, her son Jon of Fredericton, New Brunswick, and her grandchildren Janet, Ian, Farrah, Derek, Todd, Joseph and Nicholas. Her husband of 67 years, Joseph, predeceased her in 2003. There was a Memorial Service to celebrate her long life at St. Alban's Cathedral on Monday, April 4th 2005 at 2:00 p.m.

Please pass on to us any news for publication here, and state whether you want any contact information included. Please use the Guest Book or Message Board.